(You'll pick your shipping method in the next step)

Most casts will have little imperfections in them, but they really are not that noticeable once painted and it will still be a most beautiful keepsake.

The information covered in this guide is organised in three sections:

1. MAKING THE MOULD
2. WORKING WITH PLASTER
3. PAINTING & FINISHING THE CASTS

All casting materials are available for separate purchase, including glue, plaster and paints. These can be bought from our refills page.

This are a few reasons as to how this can happen:

The alginate took a really long time to set

There are several reasons why this can happen:

The alginate sets too quickly

There are several reasons why this can happen:

There are a couple of reasons why this can happen:

Bubbles in the mould

Bubbles in the mould result in small, protruding bubbles on the surface of the cast as the plaster fills the space inside the bubble.

While it’s almost impossible to prevent air entering your alginate mix, there are several reasons why you might find excess bubbles in the mould:

The alginate is lumpy

When fully mixed with water the moulding material should have the consistency of a thick porridge. If the alginate/water mix is lumpy this will affect the quality of your final cast. There are several reasons that can cause your alginate turn lumpy:

Extending the life of the mould

Fill the mould with your casting plaster as soon as possible and always within 15-20 minutes. If you cannot cast your mould immediately, you can extend its life by carefully wrapping the mould in a damp cloth, placing it inside a sealed container and storing it in the fridge for up to an hour (max) before pouring in the plaster.

Excess plaster in crevices of the cast

This is caused by defects in the mould. To prevent this:

Air holes on the surface of the plaster

This is down to either a poorly mixed plaster or poor technique for filling the mould.

To minimise air bubbles/holes appearing on the surface of your cast, try the following:

Missing parts of fingers or toes: 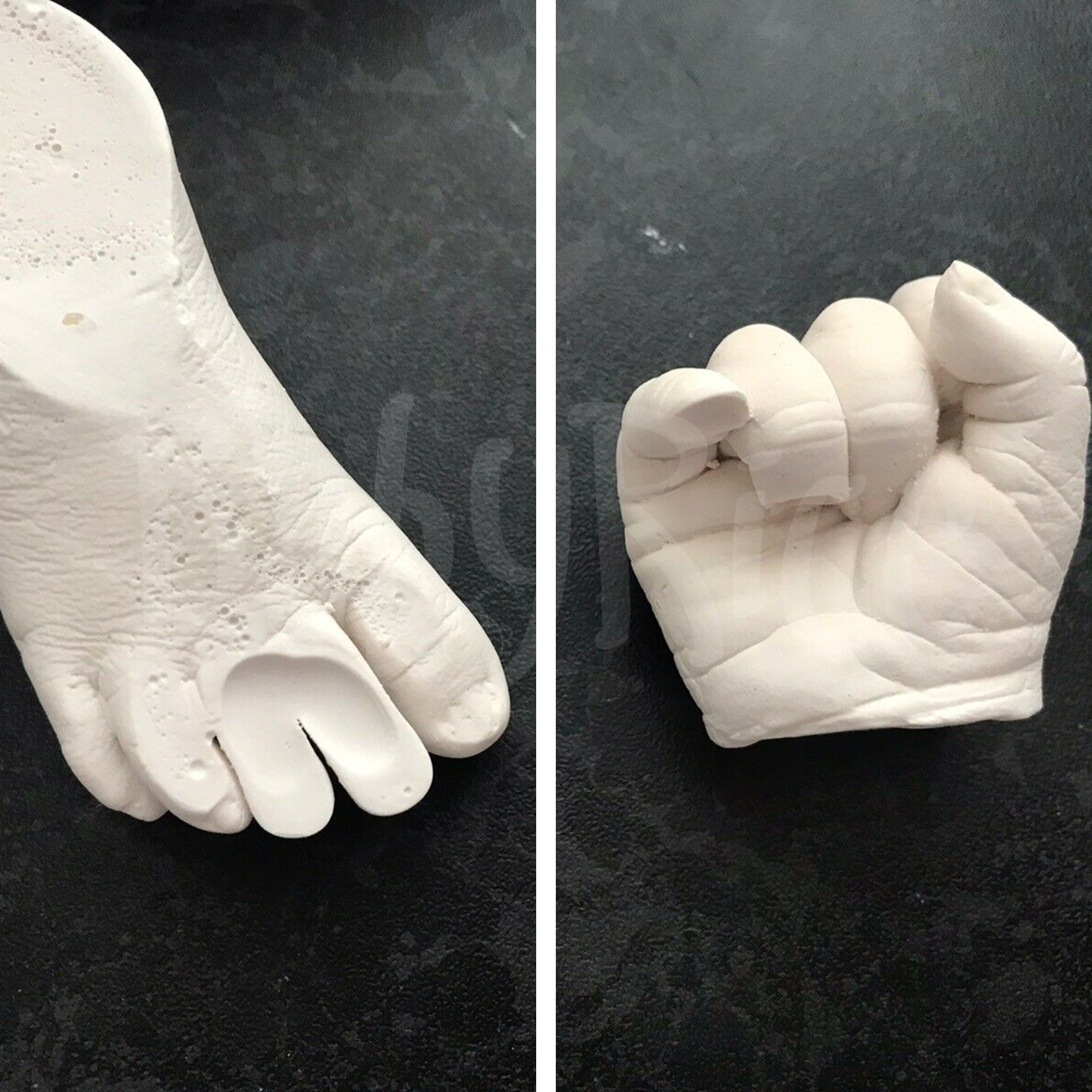 This is caused by poor technique - when filling the alginate impression mould with casting plaster plaster, an air pocket was created at the fingers and toes, instead of being filled in with the plaster. To prevent this you must:

Finger or toe snapped off while demoulding

There are two reasons why this can happen:

Lines on the surface of the plaster cast

These lines are caused by:The correct water to plaster ratio is 1:2. The plaster will start to settle to the bottom of the water quite quickly, so it's important to work qickly. If the plaster starts to settle before you have finished pouring the plaster into the mould, you will end up filling the mould with watery mix. This is what creates the appearance of 'watery' rivulets on the surface of the cast.

You can rescue those cute casts by gently brushing over the surface with a thin layer of wet plaster, making sure to wet the surface of the cast so that the new plaster can bond with the old plaster. Once the fresh plaster is dry you can gently sand any rough edges. Once painted you really won't see it!

If you have a watery top of your plaster cast - i.e. the plaster has sunk to the lower section of your mould, leaving water at the top, this is caused by:

The plaster particles are heavier than water, and if not mixed thoroughly, or if too much water is used, these particles sink to the bottom, leaving a watery top.  If you have plaster left over, working quickly you can mix up a new batch of plaster and add the plaster to the existing mould, in an attempt to fill the mould and make a full plaster cast. 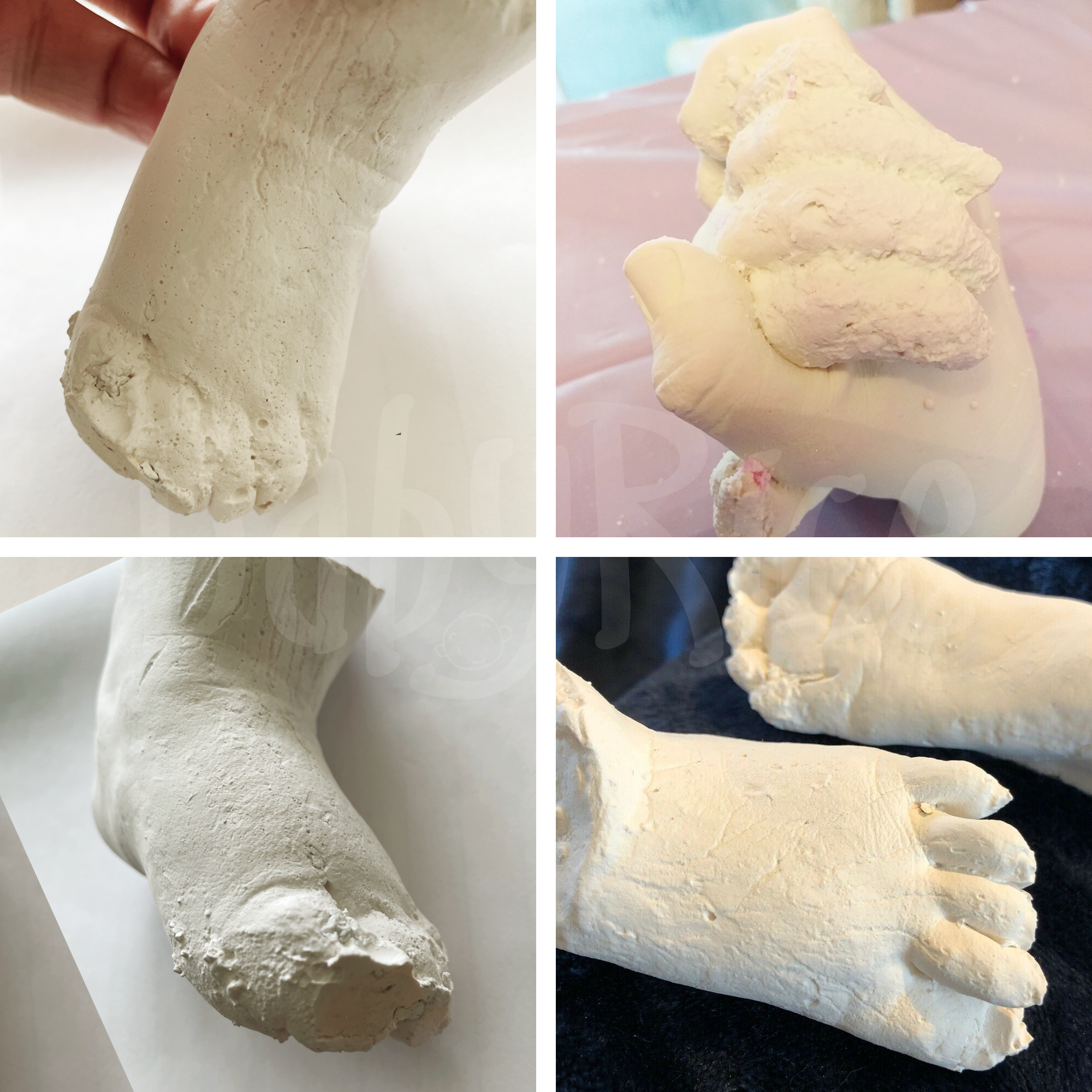 Above:  movement in the alginate impression mould whilst setting.

There are a few reasons for this:

> Movement when the alginate was setting around the hand/foot.  Too much movement stops the alginate from correctly surrounding the subject, which in turn, prevents an accurate reproduction for the impression mould.

> Or, the plaster has not fully filled in these parts of the mould.

> Or, the plaster cast has been left in the alginate for too long - as the alginate breaks down and becomes watery, losing the intricate definition of the impression mould.

To prevent any of the above occurences:

Paint is thin and watery

Stir or shake the paint thoroughly before use. Please ensure the lid is firmly closed prior to  shaking.

Metallic paint disappears / is the wrong colour / is glittery / is matt: 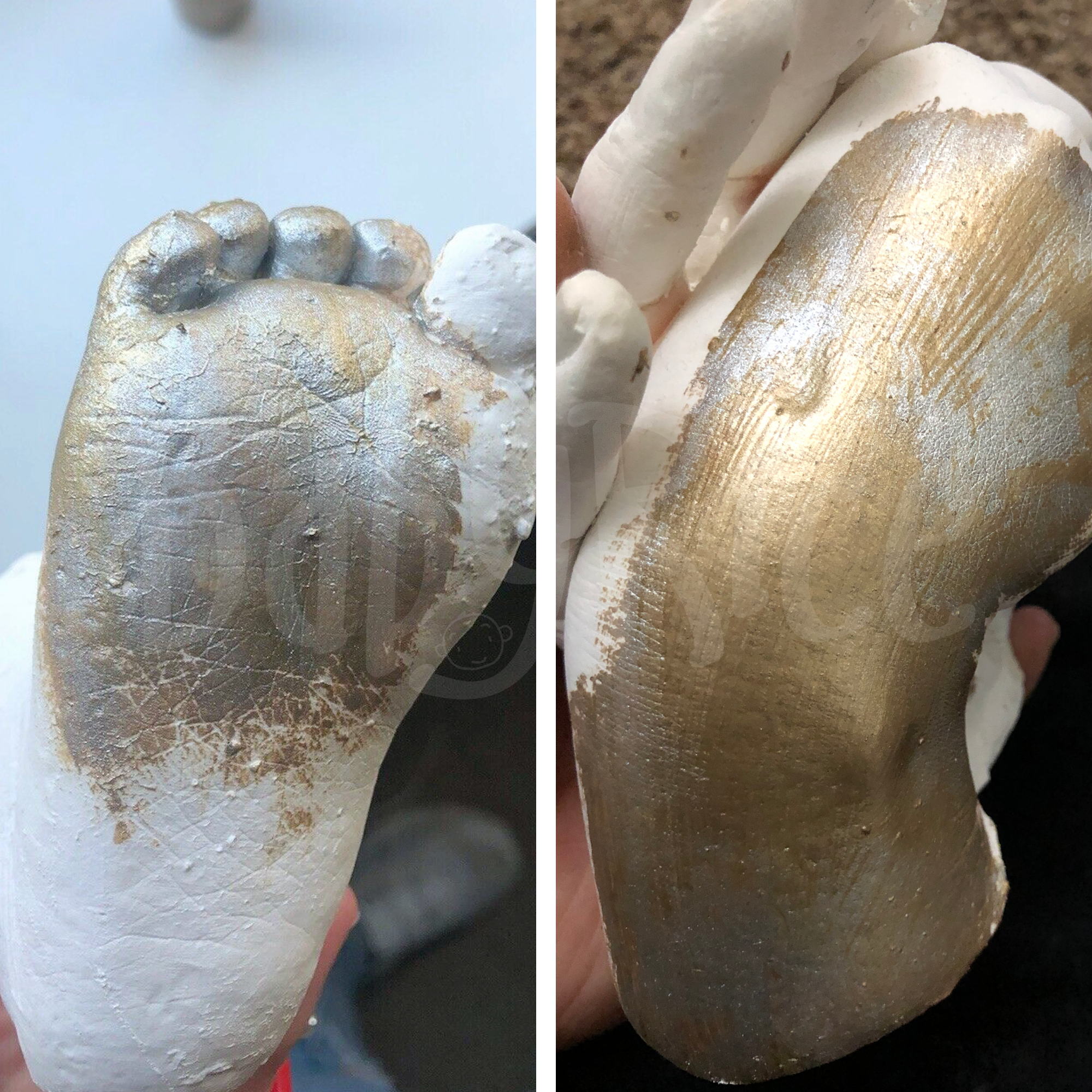 The reason that the paint hasn't taken to the cast is due to the cast still being wet/damp inside. Casts should be allowed to thoroughly dry out for at least 5-7 days before painting and ever a longer wait time is needed for larger casts or if left in a damp or humid environment.

The paint won't adhere to the cast when it's still damp, so the paint appears to disappear into the plaster. When using metallic paints, this can leave you with a cast that appears silver – this is because the metallic particles are left on the surface while the paint pigment disappears, literally being sucked into the plaster.

How do I remove the paint from my cast?

The metallic wax has dried out

Over time, the metallic wax can become solid as it’s exposed to the air. To soften, add a few drops of water and reseal the pot. Leave overnight or until the wax has absorbed the water. Repeat as required until the wax has the required consistency.

Sign up to our Newsletter to keep in the loop with our new products. Didn't receive the email? Check your spam folder and be sure to add BabyRice as a 'safe-sender' to your email account!